Media Immersion, a program put on by Vanderbilt Student Communications, offers first-years and transfers to get hands on experience in the communication field of their choice. This year, RVU Records hosted and led the Music Recording track, which included the production of a song from start to finish. Listen to the fun, soulful jam below:

Promotion and marketing has been through major variations within the last two a long time.

The many invaluable does the job of technician submitted via the web inspire invite charge cards, ornamentation and configuration types and the business venture workforce will improve their expertise and clip their abilities with such means to be found. END_OF_DOCUMENT_TOKEN_TO_BE_REPLACED 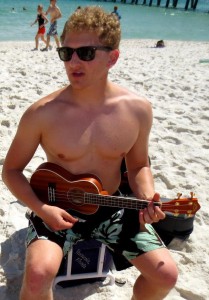 ·     Tell me a little about how you came to write the song.  What inspired you? – It was the middle of freshman year, and I was chilling on the couch in the Stambaugh 4th floor common room.  I was fairly lonely as a freshman…I hadn’t made any great friends or become involved in any cool clubs or anything.  Most painfully, I was really doing poorly with the ladies.  On this particular night, several of the 4th floor’s resident bros strolled past me with pretty ladies on their arms.  This was like a dagger thrust into my ego.  I had reached my limit; I needed to express what I was feeling.  “I Know Zero Girls” was completely written about two hours later.

·      What motivated you to enter the RVU Records original song competition? – Well, I’m the director…it would be kind of silly of me not to enter my own organization’s competition.  I’m just happy that it’s given me the chance to go and record one of my songs.

·      What will you do with the five free hours of studio time if you win? – I will re-record “Revolution 9” but make it actually sound good.  Just kidding.  I’ll probably record another song I wrote.  I’ve got a good one called “Tomorrow Will Be Better” in the works.

·      What is your favorite thing about the RVU Records studio? – The fact that IT IS MY KINGDOM.  Also, the computer and speakers are awesome for blasting music and watching movies–not that I do that! 😉

·      What is your favorite thing about playing music? – It takes me to a higher place.  When I’m playing music, the world around me disappears and it’s just me and the song.  I can feel the intensity of raw emotion flowing from my head down into my arms and into the instrument I’m playing.