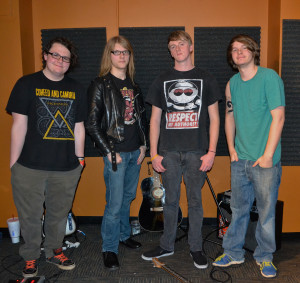 • Hometown: Nashville
• Major: Various local colleges (Ivan is Mechanical engineering here at Vandy.)
• Year: Graduating 2016
• What song did you play today? – “How Does That Make You Feel”.

• Tell me a little about how you came to write the song. What inspired you?
Ivan and Ricky wrote the song as not only a tongue and cheek look at the profession of psychology but also an ironic statement in a world where people are often overwhelmed by their day to day problems. It’s a song that follows the stereotypical line of questioning that people get from therapists, such as the question, ‘how does that make you feel?’ It follows a fictional character that is going through a hard time. “I want the lyrics to cause the audience to feel empathy for the character”, says Ricky.

• What motivated you to enter the RVU Records original song competition?
As previously self-produced, promoted, and funded band it’s great to be able to record more music and have it heard. We want to get out name out there.

• What will you do with the five free hours of studio time if you win?
We’ll definitely put it towards either the recording of another EP or supplement it with more hours and put it towards a debut album.

• What is your favorite thing about the RVU Records studio?
When working in the more professional setting things just come together so much more quickly and easily while still getting a studio sound.

• What is your favorite thing about playing music?
We’ve all grown up with music and our band is not only an outlet for creativity but a support system for each of us.